May : Transition To Early Summer

May is the transition from very early summer to early summer.  (Spell check almost caught me saying “simmer.”)  Some days are merely hot and other days are downright hot, while the nights get progressively warmer.  Queen Anne’s Lace abounds in the countryside, along with Prickly Pear Cactus and some leftover old roses in the ditches.  The white blooms of Yucca mark old cemeteries and Southern Magnolias and Gardenias rule yards new and old.  It’s a time of remembering patriots and mothers.  It’s time for a road trip that goes to the edge of the county and back.

Begin your tour on the Square in historic downtown Newberry.  Head west on Main Street.  On the right is Memorial Park which may have a few more wooden crosses and poppies added to it for Memorial Day.  Turn right on Nance Street.  Crossing Scott’s Creek we enter the old neighborhood called Brooklyn (making this small bridge Newberry’s equivalent of the Brooklyn Bridge).  On the hill behind the Public Safety Complex on the left, the Coppock House and the Gauntt House (downtown Newberry’s oldest dwelling) await the arrival of a steam engine.  (Stay tuned to WKDK for arrival details.)

Further down the street on the left is Newberry Elementary School.  A younger generation of Newberry may remember this as the old Middle School while a slightly less young generation will recall that it served as the High School from 1926-1979.  Turn right on Chapman Street.  On the right is Margaret Hunter Park, which was named for Mrs. Frank R. Hunter (1875-1934) who was very active in Civic League, UDC, DAR and the Red Cross.  Turn right on Kibler Street.  On the right is the old (or new, depending on your perspective) Speers Street School which is now Newberry College’s Center for Teacher Education.  In the 1850’s it was the site of the Simeon Fair House.  It was purchased by the School District in 1910 for the High School but eventually became an elementary school.

Turn left on Speers Street.  On the left is the Johnstone-Rutherford House.  Built for Newberry attorney George Johnstone in 1904, this Queen Anne-style home features a pebble-dashed stucco exterior and beautiful Victorian millwork on the interior.  Cross College Street onto Calhoun Street.  At the corner of Lindsay and Calhoun Streets on the left is the Lindsay-Clamp House.  This home was built by John Lindsay, a planter and merchant, in 1907.  With its wraparound porch and asymmetric plan, this home is typical of houses built in Newberry between 1900 and 1920.  Turn left on Harper Street.  Many of the homes along this street were built after the Fire of 1907.  One exception is the house on the left at the corner of Crenshaw Street.  Built in the 1850’s, this house originally stood on Calhoun Street.  Turn left on Summer Street.  The grand home on the right was built at the turn-of-the-(20th) century as a farmhouse.  The farm occupied this entire block.  Turn right on Harrington Street.  Turn right on Hunt Street.  On the left is the old building for Newberry County Memorial Hospital.  Chartered in 1923, the old building was completed in 1935 and designed by J. C. Hemphill of Greenwood.  Turn left on Main Street.

Follow Main Street as it becomes Hwy 219.  Cross I-26 and turn left on Dusty Road.  Down the road on the right is Enoree River Winery.  Turn right on Hwy 34.  After Keitt’s Crossroads, turn left on Mt. Pleasant Road.  Down the road on the left (past the intersection of Mount Bethel-Garmany Road) is the Graham House, a typical farm house with end chimneys and a wide front porch.  Like many older homes, it has two front doors.  Just beyond Ringer Road on the left, the Darby cemetery overlooks the road.  Turn left on Maybinton Road.  Cross the Enoree River which begins to widen as it nears the Broad River.  The name of the river comes from an Indian word meaning “River of Muscadines.”  This section of the county, Maybinton, was known for its large fertile plantations nestled between the ends of the Tyger, Enoree and Broad Rivers.  Turn right on Dogwalla Road.  This old road is actually a series of roads which lead to ferries along the Enoree and Broad Rivers.  There are very few signs of civilization and even fewer buildings.  A sharp left-hand bend marks the point closest to Henderson’s Ferry on the Enoree River.  After Henderson’s Ferry Road (a Broad River ferry), the present road follows its trace very closely.  It’s easy to imagine early settlers travelling the narrow trace to new homes.  At the end of the road, turn right on Tyger River Road.  Turn left on Peter’s Creek Road.  On the right is the Hardy House, circa 1825.  Built along the old river road, the house retains much of its original appearance and setting.

When we cross into Union County, the road name changes to Glymph Road.  Like Newberry, Union was one of the counties formed from the Ninety Six District in 1785.  Turn left on Maybingdon Road (they misspell it in Union).  Turn right on Brazelman’s Bridge Road.  On the left is the site of Ebenezer Methodist Church.  Organized in the 1780’s, only the old cemetery remains.  Also on the left is Seekwell Baptist Church which is one of the oldest African-American congregations in the county.  When you cross the Enoree River, notice the metal trestle bridge off to the right.  On the left is a road flanked by concrete piers that leads to the cemetery for Kings Creek A. R. P. Church.  One of two eighteenth century A. R. P. churches in the county, many descendants of early settlers from Virginia, Scotland and Ireland are buried here.  The followers of Rev. John Renwick began arriving in 1767, and King’s Creek was established by 1770.  The Southern Synod of the A.R.P. Church was founded at King’s Creek Church.

Cross Hwy 176.  On the left is a typical Newberry farmhouse from the mid-nineteenth century.   Cross Hwy 121 onto Old Whitmire Hwy.  This section of the county is known as Long Lane.  In the early years, the road cut through several large pastures, producing a long lane.  On the right is the Felker House, a turn of the century farmhouse with a wraparound porch.  On the left, just beyond Seymore Branch Road is the Dr. G. W. Glenn House.  The old house is typical of Newberry County farmhouses from the early years of the nineteenth century.  Follow Old Whitmire Hwy back toward Newberry.  At the intersection of Hwy 76, turn left and take a right onto College Street.  Coming back into town, you will pass Rosemont Cemetery.  Take a moment to stroll through the cemetery and then return to historic downtown Newberry. 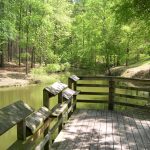 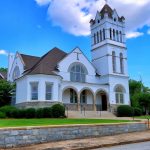 June : The Other DeclivityWKDK Road Trips