It’s April or “late spring.”  We need to get out in the country and enjoy the waning pollen season before early summer sets in!  This month’s Road Trip explores some older roads that aren’t too far away.  So, grab a frozen dairy treat and begin your tour on the Square in historic downtown Newberry!

From the Square, head east on Main Street.  Follow the road as it becomes Hwy 219.  The main thing to look out for and enjoy this time of year is green.  Everything is a bright, mature, summery green.  Among the many wild flowers in fields and forests are Daisies, Rggedy Robins, Spotted Cat’s Ear (looks like a tall dandelion), Sourweed, Red Clover and Bitterweed.   Irises and roses are appearing in yards and old house sites.  After crossing I-26, turn right on Halfacre Road.  On the right is the DeWalt-Gray-Gallman Cemetery.  Turn left on Clayton Church Road.  On the right is Clayton Memorial Unitarian Universalist Church which was founded in 1907.  At the end of the road turn right on Hwy 219.  Turn left on St. Phillips Road.  On the left is the old St. Philips School.  There are beautiful farmlands through here, and down the road an old farmhouse can be seen to the left.  Turn left on Hwy 176.

Cross Hwy 34 at Keitt’s Crossroads.  On the left is Enoree Baptist Church.  Founded in 1768, it is the oldest Baptist congregation in the county.  Next to the newer brick sanctuary is an older one which was built in 1859.  Turn right on Dove Drive.  In 1868, the African-American congregants who had worshipped at Enoree Baptist formed their own church: New Enoree Baptist Church.  Return to Hwy 176 and turn right.  Down the road on the left is the Caldwell House which was built in the 1850’s.  Turn right on Molly’s Rock Road.  This old road was part of the stage coach route between Charleston and Buncombe County, North Carolina, and is a favorite for road trips.  The trace can be seen through the woods on either side of the old road.  (If you think the road is bumpy now, imagine driving down the narrow trace with no shock absorbers!)  Off in the woods to the right is the site of Mt Bethel Academy, an early Methodist classical academy which provided the first graduating class of what became USC.  Down the road to the right is Molly’s Rock Park.  This park with its pond, picnic space and water pump has always been a favorite of mine.  Apparently the pond was used as a site for outdoor baptisms during revival meetings.  Follow the paved part of the road back to Hwy 176 and turn right.  Cross King’s Creek.  At the intersection of Old Whitmire Hwy (or Brazelman’s Bridge Road if you’re looking the other way) on the left is a typical early-nineteenth century Newberry farmhouse.

Turn right on Hwy 121.  The Annals of Newberry records a Revolutionary War incident involving Micajah Harriss and his brother-in-law James Sheppard which occurred near Indian Creek (which is up ahead) and King’s Creek nearby.  The two were captured by Tories and sentenced to death, but the officer in charge kept passing the duty of killing off until no one was left to do the deed.    Sheppard offered himself if Harriss could go free for the sake of his wife and children, but Harriss refused his brother-in-law, vowing to die together.  Struck by their loyalty, the two were “paroled” and their horses taken instead.  Cross Indian Creek.  Turn left on Old Newberry Highway. (That’s what the folks in Whitmire call their end of the old Whitmire Hwy.  The two roads no longer connect because of a missing bridge near the site of King’s Creek Presbyterian Church.)

Turn left on Monument Road.  This road follows the ridge, making it surprisingly even in the hilly terrain.  Watch for the old road trace closely following the present road.  The road crosses Indian Creek with two wooden bridges.  Off the road to the left is the cemetery for Gilder’s Creek Presbyterian Church.  (There is a sign on the road near the church site.)  Founded circa 1820 on a tributary of Indian Creek, the church had disbanded by the 1850’s. Farther down the road, in the woods to the right is the site of a plane crash.  Two B-25s on a training mission collided over Newberry County in 1943.  The monument (for which the road is named) is at the end of the road on the right.  Turn left on Beth Eden Church Road.  On a bend in the road to the right is the ante-bellum Renwick-Carlisle House.  On the left, near the end of the road is Beth Eden Lutheran Church, which was established in 1843.

Near the end of Folk Road on the right is the entrance to the path leading to Tea Table Rock where the ladies of Newberry waylaid Tarleton’s troops on the way to Cowpens, thus winning the Revolutionary War (an example of Newberry’s rich heritage of folklore).  Turn right on Sweet Springs Road.  This is another country road that winds between fields and forest.  In the woods, more granite outcrops remind us that we are right on the ridge that divides the county with water on one side flowing toward the Broad River and the other side going to the Saluda.  There are small creeks running across the fields, but after all this is Sweet Springs Road.    (Be sure to “moo” at the cows.)  Turn left on Hwy 76.  Down the road, the Newberry Airport can be seen to the right.  On the left is Valmont in the old Shakespeare plant.  Cross the “overhead” bridge and turn right on College Street.  Turn left into Rosemont Cemetery.  Although the cemetery was founded in 1863, the Calmes family cemetery (the brick enclosure at the top of the hill) is much older.  Anytime of the year is a good time to visit the cemetery and remember our founding fathers (and mothers).  Leave the cemetery by the north entrance and cross College Street onto North Street (in the middle of Baxter Cemetery).  This street was once the northern boundary of the city limits.  Turn right on Fair Avenue.  Across the railroad tracks on the right is Oakland Mill, the only cotton mill still standing in Newberry.  Begun in 1910, it was purchased by Kendall Mills in 1925.  Kendall Mills closed in 1985 but continued operations as American Fiber & Finishing until 2008.  It has recently been renovated into apartments.  Turn right on Kendall Road.  On the left is Marion Davis Park with the horseshoe pitching lanes.  (Long-time Newberrians might remember that a park of that name was once located near the Post Office.)  A leader in road improvements, Davis was superintendant of Newberry Cotton Mills and mayor of Newberry.

Turn right on Bush River Road.  Just beyond Brown Chapel Road, traces of the old railroad tracks can be seen off to the left.  The railroad leading from Newberry to Laurens was built in 1854 and split from the South Carolina Railroad at Helena.  When Oakland Mill was opened in 1911, the railroad was rerouted to split at Newberry behind the present Newberry Elementary School (the old High School) so that it could go by the cotton mill.  After you pass Airport Road, turn left on Thunder Road.  This is another old dirt road, just minutes from downtown.  Driving across fields, through wooded areas and beside creeks, it’s amazing the wildlife that can be seen.  At the end of the road, turn right on Brown Chapel Road.  Turn right on Belfast Road.  As you cross Bush River, look to the left to see an old metal trestle bridge.  Turn left on Harold Bowers Road.

Turn right on Old 96 Road.   This is a vestige of the old road that led to Higgin’s Ferry before the highway was straightened.  Turn right on Longshore Road.  This is a cedar-lined road running through farm fields.  At the end of the road, St. Mary’s AME Church is on the right.  Turn left on St. Mary’s Church Road.  Turn left on Dennis Dairy Road.  Down the road, across Bush River is the Quaker Cemetery.  The Quakers (a sect of Puritans) began settling in Newberry in the 1760’s.  Most moved west in the first decade of the nineteenth century, but services were held here until 1822.  At the end of the road, turn right on Boundary Street and return to historic downtown Newberry. 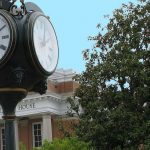