After leading his team to their first South Atlantic Conference Championship since 2016, head coach Todd Knight was named the SAC Coach of the Year by his peers while 13 members of the Newberry College football team earned All-Conference honors as announced by the league on Thursday, November 18.

In his 13th season at the helm of the Newberry football team, Knight led the Wolves to a 7-1 record in the conference and a 9-2 record overall on the year. The Wolves rank second in the league in total offense (4,612 yards), second in yards per game (419.3), and fifth in points per game (30.5). They are currently riding a six-game winning streak as they head into the 2021 NCAA Division II Football Playoffs.

Named to the First-Team All-Conference on the offensive side of the ball were Mario Anderson, Bryson Woodruff and Alec Blackmon. Blackmon was a core member of the offensive line throughout the season, playing multiple different positions to fill in needs for the Wolves. He and the offensive line would only allow 12 sacks on the year while helping the Wolves offensive be the second most productive in the conference.

Anderson was the lead running back for the Wolves on the season playing in all but one game and rushing for over 1,000 yards on the season, a milestone he broke in the final game of the year against Limestone.  His 1,110 yards was the second most among league running backs and his nine touchdowns on the year pitted his tied for the second as well.  Woodruff was the leading receiver for the Scarlet and Gray on the season as he hauled in 53 catches for 762 yards and eight scores.  His marks left him third in the conference in yards and second in touchdowns.

On the defensive First-Team All-Conference, the Wolves were represented by Tyran Dixon, Nick Yearwood an Anthony Blue.  Dixon helped lead the defensive front for the Wolves throughout the season as he led the team in tackles with 51, tackles-for-loss with 10 for a loss of 33-yards and sacks with two for a loss of 15-yards. His TFL numbers were good enough for 10th in the league. Yearwood was another core member of the defense, this time coming from the linebacker position in which he recorded 33 tackles, a pass break-up as well as a pair of quarterback hurries on the year.  Blue was a highlight machine for the Wolves in the defensive backfield all year as he led the conference in pass break-ups while also pulling in three interceptions.  He was recently honored with an invitation to the NFLPA Collegiate Bowl.

Continuing the outstanding year for the Wolves, three members were also named to the offensive Second-Team with Dre Harris, Cam Williams and Blake Arnoult picking up the honors.  On the defensive side of the Second-Team, the Wolves were represented by Ty Kelly, AJ Valentine, David Vereen and Marcus Morgan.

The Wolves pulled in the second highest number of honors between conference schools, just behind Lenoir-Rhyne who had 15 honorees.

Newberry enters the NCAA Division II Football tournament this Saturday, November 20 as they travel to Pensacola, Fla. to take on the Argos of West Florida.  Game time is set for 1 p.m. CT/2 p.m. ET.  You can hear all of the action, of course, here on WKDK at AM 1240, 101.7 FM, and by way of our streaming audio at wkdk.com and our mobile app too!  GO WOLVES! 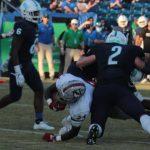