Investigator Notices Another Theft While Following Up On Diesel Fuel Theft

A Sheriff’s investigator following up on a large diesel fuel theft at a local truck plaza, witnessed another theft taking place, arrested the suspect, and uncovered an elaborate plot to steal fuel, as well as defraud unknowing people.

An investigator was following up on the theft of several hundreds of gallons of diesel fuel from the Pilot Truck Plaza on SC Hwy. 773 at I-26.

As the investigator and the manager were reviewing films, they saw someone pumping diesel into a pickup truck. As they reviewed the video, it was determined the suspect vehicle was the same from the previous crime. The investigator attempted to arrest the suspect, and he pulled away and attempted to drive off. After a brief confrontation, the suspect was detained and arrested.

Further investigation showed the suspect was utilizing stolen credit card numbers and forged credit cards to activate the fuel pumps. He was also doing something to alter the mechanisms on the fuel pump.

Sheriff Lee Foster said the suspect had an ingenious mechanism for stealing the fuel in addition to using the stolen credit card information. The suspect would pump the fuel into the pickup truck, then a rigged pump on the undercarriage of the truck would transfer the fuel to a bladder in an enclosed trailer.

Sheriff Foster warned consumers to always look at the credit card slot on a gas pump or any machine, which takes credit/debit cards and is unattended. Most times the skimmer is placed over the credit card orifice and is not firmly secured. It can be easily detected by wiggling the slot before the card is swiped or scanned. Consumers should review their credit/debit card statements thoroughly to determine if any charges are made that were not incurred by the owner, especially if you purchased fuel in the area. The statements should outline where the purchases were made and the amount. If you find an unusual charge, call the credit card company immediately and then report to your local law enforcement.

Reyes was to go before a Newberry County Magistrate Wednesday afternoon for bonding. Investigators are continuing to work with other Law Enforcement Agencies across the state that have similar acts of theft.

Sheriff Foster complimented the investigator and the store manager on being alert and noticing the same vehicle at a very busy location. “I guess the criminal does return to the scene of the crime,” said Sheriff Foster. 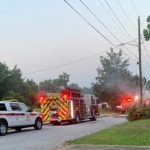