As we began reporting Monday afternoon, on June 9 at around 430 am, deputies responded to the area of Jollystreet Road for the report of a tractor driving through a shed and was still running.

Responding deputies discovered a bulldozer on top of a shed, with the tracks still in motion. One of the deputies was able to safely get on the bulldozer and take it out of gear and cut off the engine.

Upon further investigation, it was discovered that the bulldozer had been stolen from a nearby construction site and driven to the house on Jollystreet Road.

The bulldozer was aimed in the direction of the house, which caused extensive damage to the side porch, a carport, and then a block shed at the rear of the house.
Sheriff Foster said, “Investigators collected forensic evidence that developed the suspect for this isolated crime.”

Robert Fred Robarge, 41, was taken into custody on June 17 at a residence on Highway 121 without incident.

Robarge was charged with Attempted Murder, Malicious Injury to Property, and Grand Larceny for the incident that took place on Jollystreet Road.

Robarge went before a Newberry County Magistrate on June 18 for a bond hearing, which the Magistrate denied bond for the charges.

“Our investigating deputies determined this was act of revenge for allegations made in a previous case. This was a very dangerous and costly act of vengeance that could have cost the life of the person inside the house or someone traveling on Jollystreet Road in the early morning darkness.” “This criminal act shows just how far a defendant will take actions to destroy the lives of others, which will not be tolerated,” said Sheriff Foster.

Anyone with information on violent crimes, drugs, or any criminal activity should contact the Newberry County Sheriff’s Office at (803) 321-2222 or contact Crimestoppers at 888-CRIMESC or you can use the Crimestoppers app. You may submit the information anonymously. 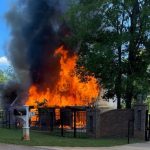