The Newberry County Coroner’s Office, along with Newberry County Sheriff’s Office, are investigating a dog attack that resulted in a fatality.  The incident occurred on Apple Orchard Lane, Newberry, and the call was received by 911 Communications at approximately 12:53 pm on Thursday, April 21.

Coroner Laura Kneece has identified Ms. Erin Beach, 45, of Newberry, as the decedent in this incident. An autopsy has been scheduled.

The dog belonged to the victim, and it is unsure what provoked this attack. When sheriff deputies and EMS officials arrived, the dog showed very aggressive behavior towards them, resulting in the death of the dog as well. Newberry County Animal Control responded and transported the dog to DHEC for an autopsy. 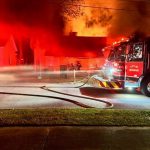