Tommir Toland age 11, and Omirra Toland age 3, were abducted by their non custodial father from the mother’s home after a forcible entry.

Newberry County Sheriff, Calhoun County Sheriff, and SLED are working to locate the suspect who appeared to have fled on foot. The custodial mother will be taken to get the children.

Tommy Toland is a black male, 43 years of age, 5’11”, 185#. He has residences listed in Orangeburg, Calhoun, Columbia and Florida. Toland is a Tier III sex offender and should be considered dangerous. Newberry County Sheriff has issued warrants for Toland for Burglary and two counts of kidnapping. 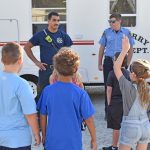